It’s a wrap! How about a thesis on Arctic spiders? How about two of them…?

This week I am thrilled to report that two of my MSc students have successfully completed their degrees! Both the projects are part of the collaborative Northern Biodiversity Program – a project aimed to quantify and understand ecological change with Arthropods from Canada’s north.

A BIG congratulations to Sarah Loboda and Katie Sim  – they are both tremendously talented students, excellent Arachnologists, and wonderful people to know.  Last night we had our annual Lab BBQ – and at that event, I was pleased to give Sarah and Katie a small token of appreciation.  Here’s a photo showing them both with their wolf spider photographs (photos by the incredible Thomas Shahan): 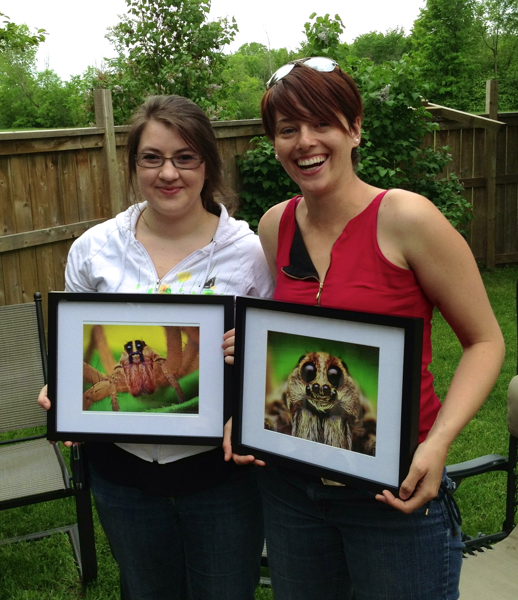 Sarah Loboda’s thesis is titled Multi-scale patterns of ground-dwelling spider (Araneae) diversity in northern Canada. Her research focused on broad diversity patterns of ground-dwelling spiders collected from our 12 study sites, spread across Canada’s north. Our project spanned 30 degrees of latitude and 80 degrees of longitude –> yes that is a lot of land area! Sarah identified over 300 spider species from 14 families, and over 23,000 individuals.  Publications are forthcoming so I won’t give details here, except to say that we can learn a lot about diversity patterns over broad spatial scales using a study taxon such as spiders. 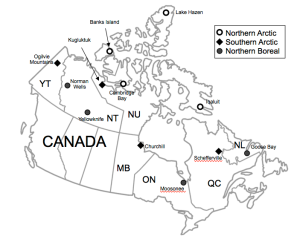 Here’s where the Northern Biodiversity Program took our field teams.

Katie’s work (co-supervised by Prof. Terry Wheeler) had a different slant, but was still on Arctic spiders. Her thesis is titled:  Genetic analysis of Pardosa wolf spiders (Araneae: Lycosidae) across the northern Nearctic. The first part of Katie’s thesis was about understanding the phylogeographic history of the Arctic spider Pardosa glacialis, with particular attention to post-glacial dispersal patterns, as inferred by population genetics. The second part of her thesis was focused on whether or not there is enough evidence to suggest two northern Pardosa species should remain as separate species, or be merged into one – based on both molecular and morphological characters.  Let’s just say that Katie had to be a ‘field genius‘, ‘lab genius‘ and ‘spider genitalia genius‘.  Here’s an example of what she looked at, a lot: 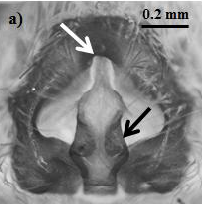 The epigynum of a wolf spider species, (part of) the topic of Katie’s research.

In sum, I am thrilled to see Sarah and Katie finish up their work, although their success also comes with a touch of sadness, as I will miss their daily presence in the laboratory.  Stay tuned… we shall soon report all the details from their research.

Posted in Deliverables, Meet the Team